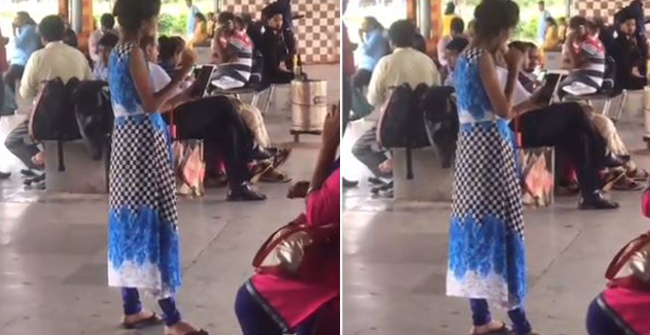 Akshay Kumar is super active on the sets of the films.  He is someone that loves to enjoy his work without feeling it like pressure or something like that.  The roles and the content he takes for his films also speak the same.  He is known for playing tricks and pranks on the movie sets and now he experienced it all by himself because of his co-star Sonakshi Sinha.

The Mission Mangal movie is going to hit the screens on the Independence Day this year and all the cast and crew of the flick are doing their best by promoting their film.  They are making many appearances here and there to promote their movie.  In the meantime, the actors of the flick are having a lot of fun it seems.  Sonakshi Sinha is the one that made it more fun and this video posted by her is the proof for it.

Sonakshi Sinha has posted a video on her Insta stories that has Akshay sitting besides her and talking to the concerned person about Mission Mangal and some other matters.  While doing so, Akshay adjusts in his chair and pushes it slightly backwards. Sonakshi, seated near him, saw the opportunity and with a slight nudge to Akshay’s chest knocked him over from his chair.

Sonakshi shares the video of knocking the chair of Akshay

In the video, Akshay can be seen falling off from his chair, while his co-stars, including Taapsee pannu, Vidya Balan, Kirti Kulhari and others were in wonder and fear. Luckily, the fall was not serious and Akshay recovered from the incident soon afterwards.  Explaining the reason behind the same, Sonakshi can be heard saying, “When people irritate me, that’s what I do.” She also wrote underneath the video saying, “You Should’ve seen their faces.”

It can be guessed that she is referring to all those present during the incident that were in wonder by Sonakshi’s bold move towards the male lead.  The video was shared by the fans and received mixed reactions from them. While many laughted at the video many others didn’t feel that knocking over Akshay Kumar’s chair that funny.