Daughter of Shah Rukh Khan, Suhana Khan, the beautiful and adorable star kid is one who stays in limelight and like other star kids, we are waiting to see her on the big screen. The gorgeous daughter of Shah Rukh is studying abroad but recently played an act in her college and dad Shah Rukh revealed how he watched her act of renowned characters Romeo and Juliet in London and he loved her.

But presently, the recent photographs are taking rounds on the internet and Suhana seems shooting for some project with her friend. We guess it is the shoot for her debut. But we don’t know the facts behind the shooting, perhaps a short movie with friends or a simple photoshoot. Well, people are getting curious to know the inside details behind the pictures going viral on the Web. 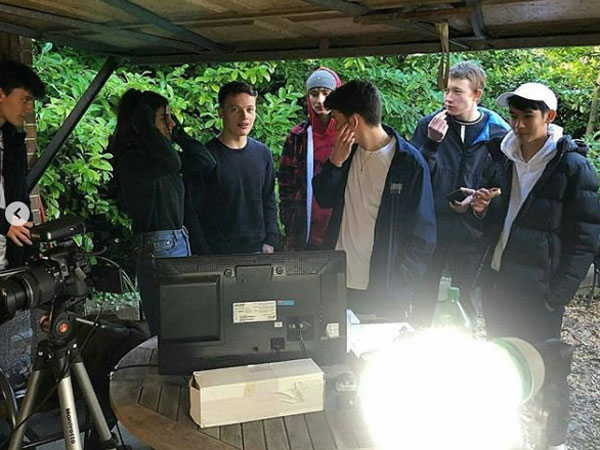 Earlier, the girl as spoken out while shooting for Vogue and said, “I don’t think there was any one moment when I decided. Since I was young, I’d do all these accents and impressions. But my parents only realized I was serious about acting when they saw a performance of mine for the first time. I was playing Miranda in a school performance of The Tempest.”

The soon to enter glamour world Suhana also said in her statement, “There’s so much to learn, and one way to do it is to start [working] early, but first I want to go to university and finish studies.”

Holding her in my arms again thanks to Vogue. ‘What imperfect carriers of love we are…” except when it comes to our children. So sending u all my love & a big hug. Hello Suhana Khan! pic.twitter.com/RrkhJ8kfz5

Proud father Shah Rukh also tweeted on his official account for daughter Suhana and wrote, “Holding her in my arms again thanks to Vogue. ‘What imperfect carriers of love we are…” except when it comes to our children. So sending u all my love & a big hug. Hello Suhana Khan.”