Swara Bhaskar and Kangana Ranaut are some of the most vocal and bold actresses in Bollywood. They are not only seen calling out problematic concepts in Bollywood, but every thing else that’s happening in country and rest of the world. That being said, the actresses are one of each other’s most vocal detractors.

Kangana Ranaut has been constantly tweeting about the farmers protesting Punjab. The actress has definitely grabbed a lot of attention with  her latest tweet that has created a huge rage across the country. And the actress’s latest misfired salvo at an aged protester at a farmers’ rally, has left Swara incredibly incensed. 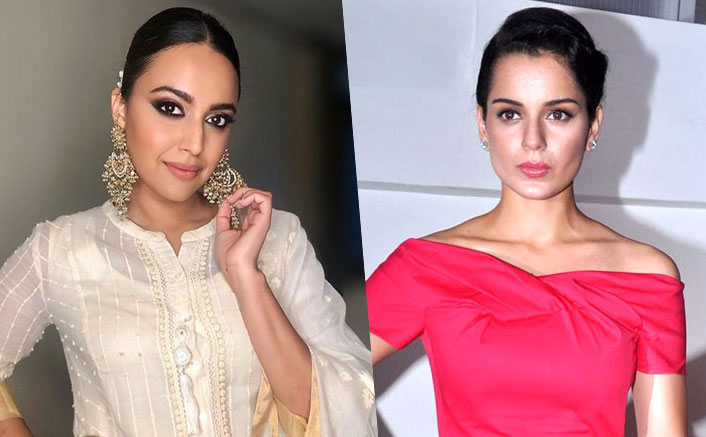 Swara Bhaskar took to her Twitter handle and shared a tweet where she said that Kangana has become a synonym of sharing toxic fiction. She said that most of the tweets shared by Kangana whether about history or current affairs are fiction cooked up and driven by a particular agenda.

Further, she talked about Kangana’s comment where she not only misidentified the rallyist but also opined that she was available for any rally for Rs 100. Swara said that the utter disrespect for the elderly is what bothers her the most. She said that Kangana’s comments on Jaya Bachchanji and other senior actresses was not just distasteful it was utterly disrespectful.

Swara said that she has spread slander against Bilkis Bano and Shaheen Baugh Dadis. Furthermore she talked about what Kangana said about Mahinder Kaur ji was also not just inaccurate lies but to say about an elderly farmer that she is ‘available for 100 Rupees.’ Swara Bhaskar was also seen praising Diljit Dosanjh for calling her out and not letting the issue slide. She added that Taapsee Pannu, Richa Chadha and herself have called her out in the past and it’s good to see a star of Diljit’s stature take a stand for this cause.

She concluded the whole thing by saying “If Kangana wants to fight, let it be with her contemporaries, I’m happy to keep her engaged. But I request her to please spare our elderly the vile nonsense. Once again to her I will say, Thakk Jaa Behen!”