While the whole country has been longing a small vacation to relieve themselves of stress, there are a few Bollywood stars living the dream. One such Bollywood actress is Taapsee Pannu.

The actress recently wrapped up the filming for a Tamil comedy film co-starring Vijay Sethupathi. While talking to a news portal about the same, Taapsee had shared that they were filming in the middle of a village. She had revealed that there were small hills around them. That’s why, when she had a holiday, she went for trekking and it was a lovely experience. In fact, the actress took to her Instagram handle and shared a picture from her last day on the sets. 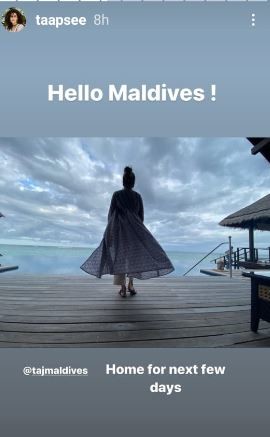 Now, to relieve all the steam, the actress is taking a little vacay to Maldives with her girl gang Shagun and Evania Pannu. The actress took to her social media handle and shared pictures right from the time she set her foot at the airport till the time she reached her favourite holiday destination, Maldives.

The actress shared a selfie with her sister, and wrote on her Instagram Stories, “Let the vacation begin”. After this, she shared a picture of her holding origami flowers presented to her to welcome her board by the airlines and thanked them. Abiding by the safety measures, all three of them were seen wearing masks and face shields. Sharing the same picture from the flight of her sisters, she wrote, “My distressed travel buddies.” 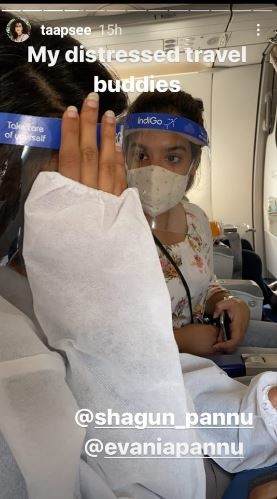 Meanwhile on the work front, the actress was last seen in Anubhav Sinha’s film titled Thappad. The movie was well appreciated by the audiences and critics alike. She has many interesting projects in her kitty already, like cricketer Mithali Raj’s biopic, Rashmi Rocket and Haseen Dillruba.