Saif Ali Khan and Kareena Kapoor are one of the most sought after couples in Bollywood. The couple was married in the year 2012 after several years of dating. Their wedding was the talk of the town and one of the biggest events that year. And after a few years of marital bliss, the gorgeous couple embarked the journey of parenthood as they were gifted with a baby boy.

The celebrity couple named their little angel as Taimur Ali Khan Pataudi. And as soon as the first glimpse of that little goofball went around the world, fans went crazy over his cuteness. Ever since then, every time paparazzi sees Taimur, they try to capture him as much as possible and he never fails to amaze internet with his cuteness.

Recently, a video of Taimur surfaced on internet and it speaks volumes of child like bliss we miss in our lives. This unseen video of Tim has him singing a birthday song with happiness and zeal. In the video, we can see Taimur sitting and singing the birthday song with his parents as one of their staffers cut his birthday cake.

While singing, Taimur’s pitch goes high in between, and then Saif reminds him to sing nicely and the loving son follows his father’s instructions. Soon Taimur will turn 4 and the video gives us a perfect glimpse of his enthusiasm with birthdays. 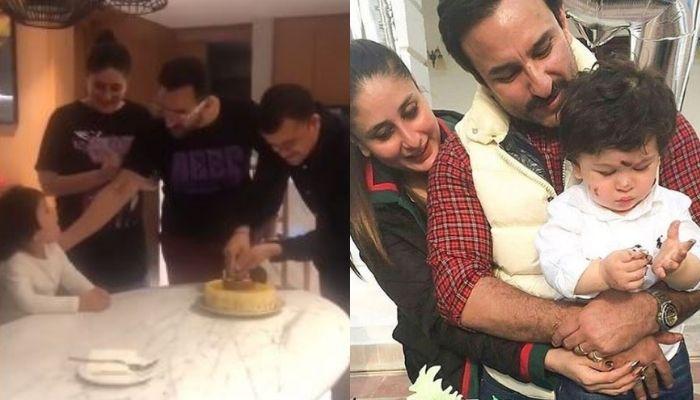 Taimur, who already has millions of fans, will soon become a responsible elder brother as Kareena and Saif are expecting their second baby. Although Saif and Kareena try to keep Taimur away from the limelight, his adorable moments always make their way to the social media.

Recently, Saif and Kareena had celebrated their Diwali in Dharamshala and the family was joined by Malaika and Arjun. Some glimpses from their trip to the beautiful hill station had also made its way to the internet.