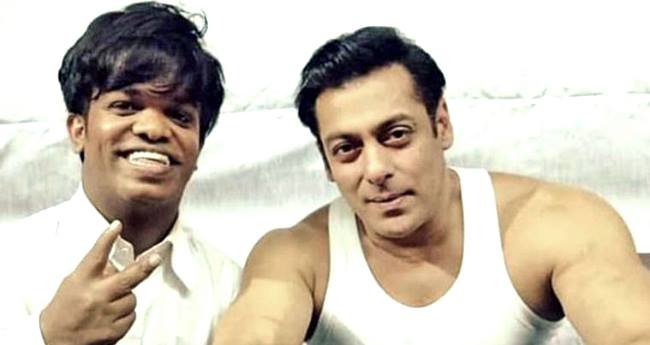 After delivering a blockbuster hit Race 3, Salman Khan has started shooting for her upcoming film Bharat. Bharat is one of the most anticipated movies of the superstar and the film has already created a lot of buzz since its inception.

The movie was recently in the news when Ali Abbas Zafar confirmed Priyanka Chopra’s exit from it. A few days back, he also announced the leading lady of the film who replaced Priyanka and its none other than Katrina Kaif.

The die-hard fans of Salman are now eager to see get a sneak peek of the actor’s looks in the film. As we all know, Salman will be sporting multiple looks in the film as the timeline is spread across from 1960 to present times which has made the fans more excited.

And now, Trade Analyst Ramesh Bala took to Twitter where he shared one pic with Salman which has led to the speculations that it might be Sallu’s one of the looks from the film. Bala’s tweet read, “Salman Khan took pics with fans and circus artists on Bharat sets. So, we get to see a glimpse of one of this looks for Bharat. A period drama spanning over several decades.”

So, we get to see a glimpse of one of this looks for #Bharat

Dressed in a white vest and pants, Salman appears to be dressed as his character – a bike-stuntman in a circus.

Ace fashion designer Ashley Rebello who is in charge of styling the film’s cast shared a pic of Salman on his official Instagram handle. However, there it is not officially confirmed if that was one of Salman’s looks from the film. But the fans couldn’t stop rejoicing regardless considering it as the first-look photo.

Apart from Salman and Katrina, Bharat also stars Disha Patani who will be seen playing a trapeze artiste. Disha is also likely to sport multiple looks in the film.

Ali Abbas Zafar stated that the movie will be a tribute to cinema legend Raj Kapoor’s Mera Naam Joker. He stated, “The idea is to create an Indian-Russian circus like Raj Kapoor’s Mera Naam Joker. Performers from all over the world are flying down for the circus tricks which will be a mix of trapeze hoops and rope stunts. This is Salman and Disha’s introduction. He plays a daredevil stunt motorcyclist in the circus while she is a trapeze artiste.”

So folks, how excited are you for Bharat? Tell us in comments.