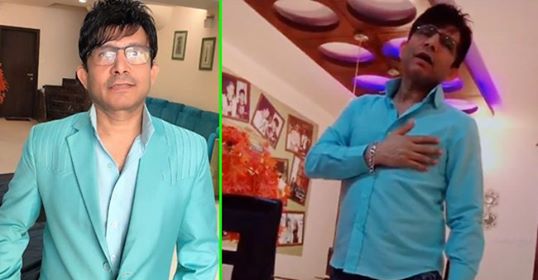 Ranveer Singh is arguably one of the wittiest actors in the Bollywood industry right now. From his peculiar dressing sense to his funny antics, the actor is well renowned for being a little different at times. While people have an indifferent opinion about Ranveer’s behavior he certainly pays no heed to trollers and enjoys living his way on his own terms.

Having said that, in the year 2016, Ranveer did what nobody expected. The actor, before the release of his film Befikre, as part of maybe promotion of his film, danced to Kajol’ s song ‘Mere Khwabon Me Jo Aaye’ from DDLJ, that too in the shower, trying to imitate Kajol’s part with the towel as well.

The video cracked up netizens back then as well, and now for some reason, the video is going viral again on social media. Ranveer dancing in the shower, lipsyncing ‘Mere Khwabon Me Jo Aaye’, while he sang to the tunes of the song and asked Aditya Chopra to release the trailer of his film Befikre soon.

Obviously Kajol’s sequence from DDLJ on the same song remains iconic for obvious reasons, however, Ranveer’s take is equally as euphoric. Now that the video is going viral again, fans cannot help but cry in laughter on Ranveer’s antics.

Meanwhile, on the work front, Ranveer is currently preparing for his upcoming movie, ’83, which is the biopic of Kapil Dev, and will show the story of the Indian Cricket team’s first-ever World Cup triumph in the 1983 World Cup. The film directed by Kabir Khan, also stars Deepika Padukone, as his on-screen wife and will release next year.

Kajol meanwhile is currently preparing for her next film alongside her husband Ajay Devgn. The couple will be seen in the film Tanhaji: The Unsung Warrior, which hits theatres in January next year.